When to Discuss the Behavior 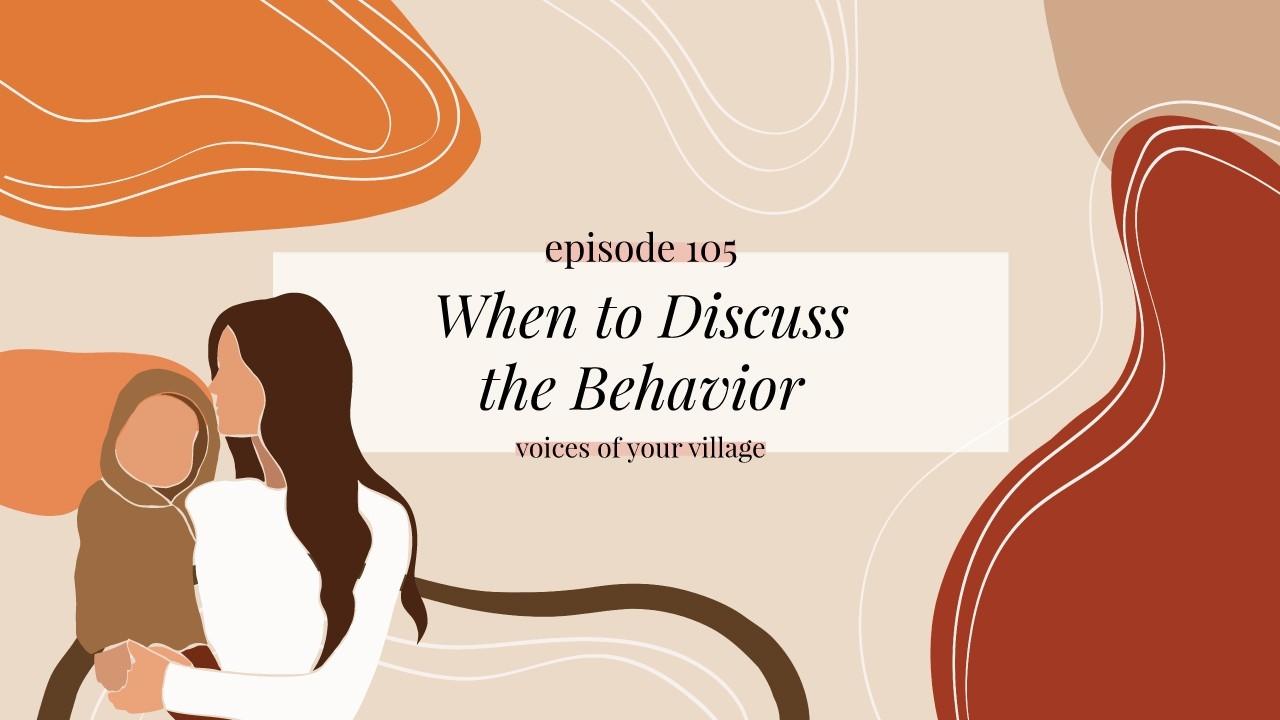 You're listening to Voices of Your Village. This is episode 184. In this episode, I am diving into when to discuss the behavior with kiddos. So often, when it comes to behavior, we have this inclination to step in and talk about it right then. What they can do, what they can't do, what they're supposed to do, what they're not supposed to do etcetera, because we have these underlying fears of, if we don't talk about it right now, they'll think this is okay, if I don't address this, am I encouraging it to happen again? We're diving into all of that in this episode because the reality is, in the moment is the worst time to discuss the behavior. So let's dive into what we can do in the moment. And when we can come back to talk about the behavior in a way, that's more effective, both for the short, and for the long term and more productive. All right, folks, let's dive in.

Listen y'all, when we are emotion coaching, it is not a time for law enforcement or delivery of Justice. I'm gonna repeat that because that is the theme for today's episode. When we are emotion coaching, it is not the time for law enforcement or delivery of justice. Let's say your child hits a friend at a playdate. Your inclination might be to address the behavior. We don't hit. Hitting makes him feel sad. Oh, no. When you hit him, it made him feel sad. What should we do to help him feel better? You might be tempted to go there first. If we are addressing the behavior right now, The child's emotional needs are not being met, which means we will likely see another behavior real soon. We also won't see a change for the future if we don't teach this kiddo, how to build awareness around their emotions, express them in a pro-social manner and how to process them. When the child is feeling an emotion, they have cortisol running through their body. Cortisol is a hormone that is our like fight/flight/freeze hormone. It actually does quite a bit in our body and what happens is that your hypothalamus and your pituitary gland which are both located in your brain. They can sense if your blood contains the right amount of cortisol. If it's too low, your brain will ask your body. If it's too low, your brain will let your adrenal glands know located down by the kidneys and they will up the cortisol. They'll pump a little bit more out. This will vary from day-to-day and instance to instance, when your body is on high alert, when you are operating from your amygdala, which is another portion in your brain, then your body sends the message for cortisol to increase. So, you get this rush of cortisol and it shuts down your prefrontal cortex, which is your rational thinking decision making part of your brain, so that you can react to situations. When your body feels like you're in danger or there's fear of something, then it's your body's job to simply react and not be thinking, like what should I do here? When the cortisol is on high alert, when there's a bunch of it running through your body, it's going to shut down a lot of things in your body actually, the functions of your reproductive systems, your digestive systems, your immune system and even growth processes will be off. And then the idea is that after the danger has passed your cortisol levels, should calm back down and regulate, your heart and your blood pressure and other body systems will get back to normal and it'll regulate and then you could say talk about the behavior. But when there's high cortisol, what we are doing to support our kids is emotion coach them and provide them with coping tools and co-regulation to help them regulate to help stop producing so much cortisol to leave the amygdala and come to the prefrontal cortex. Once they've hit their not in a place right now to rationalize, their heart is racing, their blood pressures up, their bodies probably tense with cortisol, rushing through their body, our job is to emotion coach them, more on that in episode 63, if you want to dive deeper there, to emotion coach them and support them through this. We talked a lot about this in episode 61 on hitting and how to respond. But I get a lot of questions about like, well then, when do we talk about the behavior? How's my kid going to know that they're not allowed to hit, so that's what we're going to focus on here. But I think it's key that you understand the system's first. What can happen is that if we have cortisol rushing so often or it's not being regulated. So, if, when the cortisol rushes through a kid's body and they aren't emotion coached and supported in regulating that cortisol and learning coping strategies, to help themselves, learn how to regulate it, what can happen is cortisol continues to flow through the body and not regulate and not calm down. And this can be a leading cause of things like anxiety, when you are experiencing anxiety, you're in fear, you're stuck in fear, operating from your amygdala with cortisol, really dictating your decision-making. You're not accessing your prefrontal cortex. You're not from a calm place where you get to make decisions with a rational decision making. It can affect so many things, it can affect memory and concentration. And it's linked to a lot of like chronic illnesses, headaches and heart disease, weight gain and trouble sleeping. Because what we're doing is creating a hormone imbalance. So there's so many, there's so much from an emotional development perspective for why we don't talk about the behavior when a kid is experiencing this emotion but from a biological and physiological standpoint here it's our job to help them regulate the cortisol first.