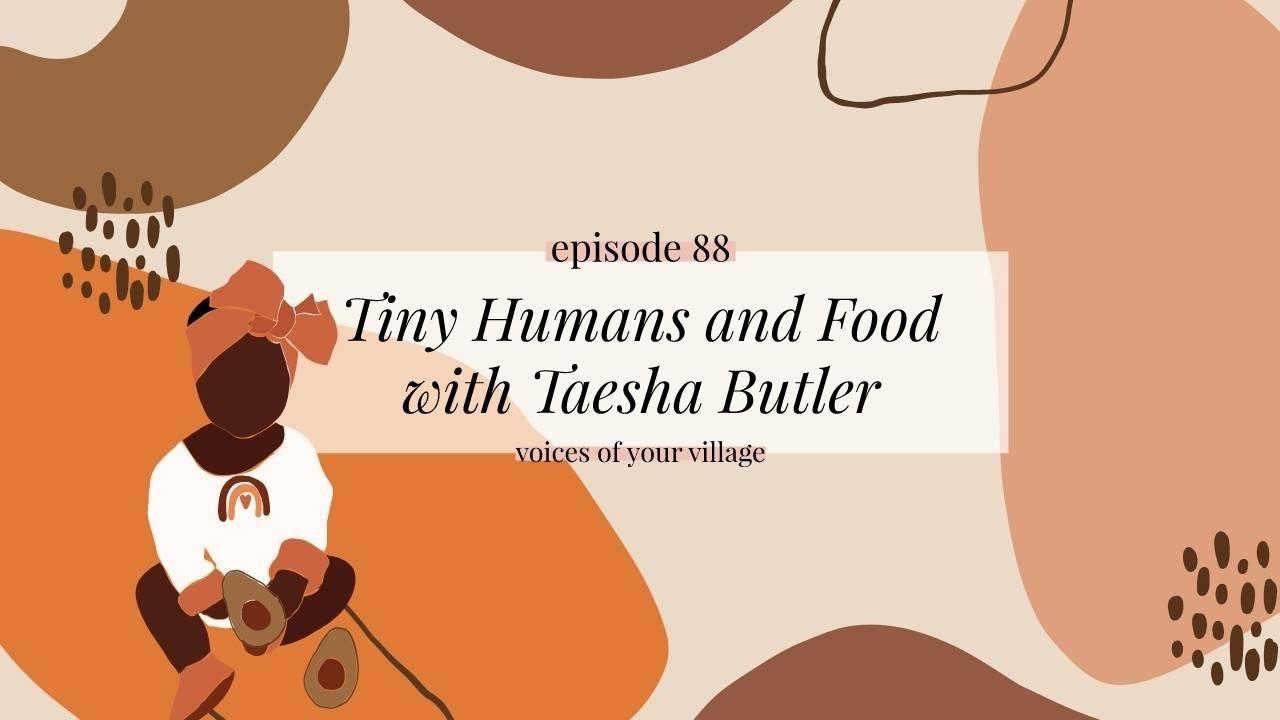 In this episode, I was jazzed to talk with food and healthy living expert Taesha Butler, also known as The Natural Nurturer. Taesha originally started her Instagram account @thenaturalnurterer to share her ideas for simplified eating in a busy, modern life as a full-time working mom, and it soon evolved into a community of people who she passionately helps and shares meal ideas with. She focuses on helping people get vegetables into every meal, and create healthy relationships with food. Taesha taught preschool as an early childhood educator for 18 years before The Natural Nurturer became her full-time gig.

We put this topic out to the village and got a whole bunch of questions. One of the most common questions from parents was, “What if my kiddo refuses to eat their meal?” Taesha shared that a couple of key points to keep in mind when feeding your child are one, kiddos go through various growth spurts, and once they have completed one, they’re naturally not going to have a huge appetite, and two, kiddos’ senses are much more sensitive than ours, so when it comes to something spicy, it will seem much spicer to your kiddo than you, for example. Also, in the toddler years, children are discovering the power of “no,” and this is one of the few things they have some power over. Help give as much back to it as you can while still having ultimate control as the parent.

Taesha shared that she gets a lot of questions about bedtime snacks, and she always tells folks that if a kiddo refused to eat their dinner and they request a bedtime snack, then that dinner is still their option. If you don’t want to go the route of making their uneaten dinner their only option, just be sure not to make the snack much more appealing to them than their dinner - they will learn that if they don’t eat dinner, they will just get their favorite thing to eat before bed.

Should we be offering our tiny humans another choice if they refuse to eat anything on their plate? Taesha says it depends on what you’re serving them. Are they all brand new foods that they don’t have any experience with or you know off the bat they’re not going to like? In that case, it’s not really fair to your child to make them eat it. Taesha says that what she tells people is to provide a food to your kiddo that you know they’re going to eat, a food they are warming up to, and a food that is new to them. Even if they don’t touch the new food, they are still looking at it and being exposed to it. They will eat the food that you know they like, so you can rest assured they’re eating something. Taesha is a huge fan of muffin tin meals, which you can learn more about on her website. A follow-up question to this is what if your kiddo eats all of the item she does like, but doesn’t touch any of the other food, and asks for seconds of the one she ate, can she have it? Taesha says, “yes.” As the parent, she is calling the shots on what is being served, so the kiddo can call the shots on what she eats and how much. When it comes to her own daughter, she practices this because she doesn't want negative vibes around food to turn into a negative relationship with food. What if your kiddo constantly avoids a whole food group? Taesha believes there are creative ways to sneak in vegetables, for example, which is one reason she came up with the veggie-loaded meals. It also takes some experimentation to figure out the form in which your kiddo likes a food, for example, sauteed versus baked.

How do we handle the resistance to trying new foods? Do we force the “try-it” bites? Taesha is all about building positive relationships with food, so she personally doesn’t force a “try-it” bite with her own daughter. She recognizes, as stated before, that this is an element of control for a lot of children, so forcing it will cause them to create a wall to that certain food. So how do you get them to want to try new foods, then? It requires patience, consistency, and creativity. Simply putting new foods on your kiddo’s plate or table to expose them to it and get them used to it is a step in this direction. Eventually, you may be surprised when one day they take that first bite. Her daughter’s favorite food is broccoli, but Taesha admits she offered it to her daughter at least 50 times before her daughter would even taste it. She also recommends working on loving new foods away from the dinner table - there are incredible children’s books about trying new food out there. When she was in the preschool classroom when a child would take a bite of a new food, they would get to ring a bell, coined “The Bravery Bell,” as a way to congratulate them, and that was very motivating.

We chatted a little bit about the concept of “food” and “healthy” in our culture. How do we talk about food to kids in a way that cultivates a relationship with food that we want them to have? Taesha suggests role modeling the relationship with food that you want your child to have. Be conscientious of how you talk about food around them, too. In her family, they refer to foods like ice cream and chips as “fun foods” and she tries to steer clear of labeling foods as “healthy” or “unhealthy.” Are ice cream and chips delicious foods that we can enjoy on occasion? Yes. Do they have the nutrients needed to fuel our bodies? No. If you as the parent indulge in some ice cream, don’t say in front of your child, “Ugh, I have to go run seven miles now to burn off these calories.” Share the amazing things about nutritious foods - “we eat apples because they have lots of vitamins in them and clean our teeth when I bite into them.” Try gratitude practice around where our food comes from and the benefits they provide our body with your kiddos. Allowing opportunities in which your kiddo is invested in the food in some way makes them more likely to eat it, and if these opportunities provide exposure to healthy foods, it’s so beneficial. For example, grow a garden and involve your kiddo in that process, or if you don’t have that opportunity, even involving them in the cooking or preparing of the food will give them a sense of investment as well.

Provide a food to your kiddo that you know they’re going to eat, a food they are warming up to, and a food that is new to them.

Snacks: the bane of every parent’s existence. Being such, Taesha and I definitely had to chat about this. Taesha says that first, it’s important to know your child’s real eating habits, because some people are naturally grazers. If you have a kiddo who you think falls into that category, as long as they are snacking on real, nutritious foods, then she thinks it’s fine. But, if your child is passing on meals and then 20 minutes later asking for a snack, then that’s a no-go. If her daughter asks her for a snack between lunch and dinner, she makes sure she knows that it is her only snack until dinner, and also when dinner will be. She also cuts off the opportunity for a snack about an hour and a half before dinner. If your child is “starving” before dinner, chop up some veggies, for example, and allow them to munch on them. Another great idea is having snack bins in the cupboard and fridge that have nutritious snacks in Ziplocs for your kiddos. Taesha points out that giving your kiddo this independence to grab their own snack that you’ve prepared allows them to feel some control and for you to feel good about what’s going into their bodies.

What should the limits on sweets and junk food be to foster a healthy relationship with food? What if your kiddo has barely eaten anything that will fuel their body all day, but then has a family birthday party later on where there will cake and ice cream? First and foremost, Taesha tries to talk to her kiddo about why they don’t have tons of sugar in their everyday lives - because it doesn’t fuel our bodies and it makes us feel a certain way. She wants her daughter to have the awareness, but won’t prohibit her from enjoying those things in those instances if she wishes. She also mentioned that she doesn’t make dessert a reward for eating dinner. One reason is that it may send the message that she has to “suffer” through the nutritious food in order to enjoy the “fun” food, which in turn sends the message that “fun” food is the better, more desirable food. If dessert is on the menu for anyone, it’s on the menu for your kiddo, too, and if they are consistently avoiding their dinner to get to the ice cream, try eliminating ice cream from the menu until they’ve practiced some better eating habits. She also suggests serving dessert with the meal (maybe as part of one of her muffin tin meals), because it takes away the power of the dessert being the “pot of gold at the end of the rainbow.”

We got a few questions about kids having to go through an elimination diet due to allergy concerns, and how to address this with the tiny humans. Taesha advised to talk to your kiddo about it, but don’t overtalk it. For example, if it’s dairy being eliminated from the child’s diet, take it upon yourself to eliminate dairy from their breakfast and dinner, but involve them in choosing non-dairy options for their lunch. Say, “We’re going to take the cheese stick out of your lunches for a while because we’re not sure how it’s making your body feel.” As far as resources for elimination diets, Taesha tries to include modifications as often as possible on her own recipes, but also noted that there’s a blog with recipes for every type of elimination diet out there. Coconut yogurts, almond milk yogurts, dairy-free cheeses, and nutritional yeast are all good dairy substitutes.

Is it okay for kiddos to play with food at the meal table or even get up, go play for a minute, and then come back? What should these types of boundaries be around mealtime? Taesha actually sees playing with food as beneficial as it’s food exploration for tiny humans (as long as they’re not flinging it across the table). In her opinion, for kiddos leaving the table during mealtime, Taesha suggests advising your kiddo that mealtime will last a certain amount of time, and when the time is up, removing their plate from the table. If they’ve spent too much of their time away from the table and missed their opportunity to fill up, and you consistently hold that boundary, eventually they will quit getting up during mealtime.

Thanks for hanging out with me, Taesha, and answering our village’s questions about tiny humans and food!