How to respond instead of spanking 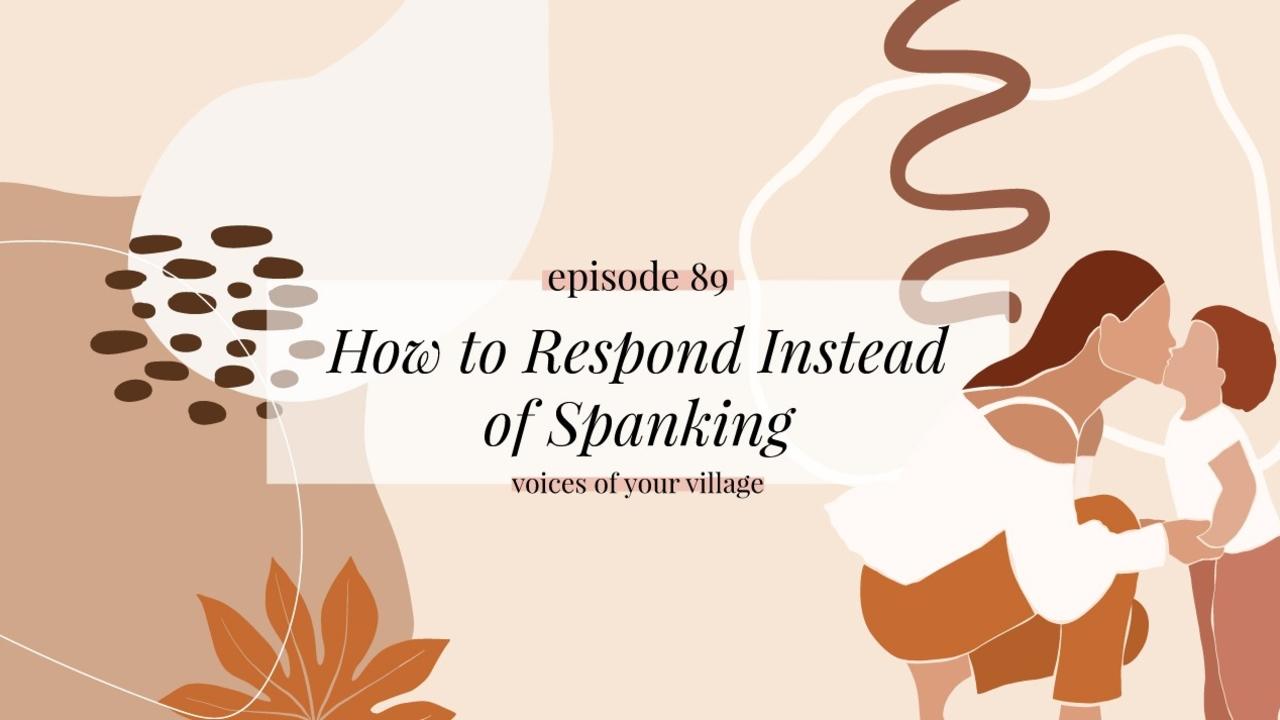 I’ve had a lot of people from our village reach out to me about the sometimes taboo subject of spanking, so I decided to do an episode on it, and asked the villagers for their questions on this.

First and foremost, I’ve never met anybody who had other tools in their toolbox besides spanking who still felt like spanking was the best way to handle a situation. I think spanking happens when someone is at their wit's end and they don’t know what else to do. If you have found yourself in this position, please remember: this is a shame-free, guilt-free zone, and I’m not here to make you feel either of those things.

The first question from our village was, “I am firm in not using spanking as discipline, so what is some data I can share with others who believe in spanking as a consequence to defend my stance?” First of all, remember that shaming someone isn’t productive and people can often be defensive. When we don’t ask for parenting advice and someone gives it to us, it’s often not well-received. The best chance for this conversation is to start by empathizing and making it known that you get their feelings of frustration and feeling like you’re at your wit's end, in order to open up a dialogue about this. Continue reading for some compelling research you can share.

Over 50 years of research has shown that not only is spanking ineffective, but repeated exposure actually reduces the gray matter volume in part of the prefrontal cortex which plays a crucial role in social cognition.

The next question was, “Spank or don’t spank? How do I reprimand? How do I set boundaries?” We’ve already established that the answer is, “don’t spank,” but the follow-up question is “well, what, then?” We’ve got to build our toolbox with things besides spanking. You’re setting boundaries constantly whenever you let your kiddo do something or you don’t let your kiddo do something. Boundaries are expectations that we enforce. Episode 3 is all about boundaries, and episode 78 is about expectations - check those out for a bit more detail on those. If your kiddo is consistently behaving or doing something you don’t want them to do, the message we should be getting is that there is something that they need to be taught, and that doesn’t happen through physical punishment.  Oftentimes kiddos are just trying to connect with us, and they just don’t know how. Ask yourself what your tiny human could possibly be trying to communicate with you through their behavior. Episode 46 is all about discipline - what does discipline mean and what are some alternative ways to discipline our kiddos.

Question three was, “Any suggestions on how to handle when other people spank?” If this is your kiddo, be a fierce advocate for them. Explain that you have other tools that you can share with them.  Over 50 years of research has shown that not only is spanking ineffective, but repeated exposure actually reduces the gray matter volume in part of the prefrontal cortex which plays a crucial role in social cognition. Not only does it not make kiddos “listen,”but,  we’re also negatively affecting the brain. What you’re saying is that if somebody doesn't listen to your rules, it’s okay to hurt their body. To hit them. Is it then not a shock to hear that kids who are spanked are more likely to be not only perpetrators of domestic violence but victims of domestic violence too? If when your child doesn't listen, you hit her, down the road, she may think it’s totally acceptable to be with a partner who hits her when she doesn’t listen. She might think that that’s the expectation.

If when our kids are having a hard feeling and they express their hard feeling, and our response is to spank them to make it stop, we are not raising emotionally intelligent humans.

Someone else asked, “I saw my brother-in-law pop my 21-month-old nephew on the butt. How do I deal with these emotions?” It’s so hard when you witness it. Try to connect with your BIL: “I know, it’s so frustrating when they aren’t listening.” Then, share that you’ve recently seen some other research on spanking and found it kind of startling. At least planting the seed (no pun intended!) might open their mind.

There were a couple of questions wondering if spanking is ever necessary, like in a life-threatening situation, and someone stated that they’ve “popped” their tiny human on the butt when running into the street as a way to “shock” them out of not listening. No, it’s never necessary; there is always another way to handle it. Rather than spanking, respond a bit differently, like with a different tone, body language, and reaction time, to send the message that this is serious. In a situation that they are not safe, you can often give them two options that you are comfortable with - for example, you can tell them you can carry them, or they can walk while you hold their hand. If there is resistance, keep holding their hands tightly and remind them of their choices and that “blank” is not safe for them. I think oftentimes when our kiddos cause us to feel fear, we want them to feel the fear too so they won’t do it again or won’t want to do it again.

There is a ton of evidence-based research out there that supports that spanking is not effective. Spanking is an incredibly outdated recommendation, and since research on children has increased, our understanding of this has evolved. It’s a “know better, do better” type of situation, just like car seats have changed over the years to be safer so car seat deaths have reduced drastically. We all know someone who was spanked as a child and “turned out fine,” but that doesn’t mean we should still be doing that. Over the 50-plus years of research, we’ve learned that spanking has many long-term negative effects: kids are exhibiting more aggression, anxiety.

Spanking alone is associated with outcomes similar to those of children who experience physical abuse.

Kiddos should know that it’s okay to feel hard emotions, but at the same time, that it’s not okay to hurt somebody’s body, and that they can develop tools and coping strategies to process their emotions. If our response to our kiddos when they are expressing hard emotions is to spank them, we are not raising emotionally intelligent humans.  What we are saying to them is that we want their behavior to stop, but we don’t know how else to make it stop, so we are going to hit them to make it stop. Instead, we want to question what the emotion is behind the behavior, so we can respond to the emotion - as a result, the behavior will stop.

What do you do if you want to address a behavior and/or emotion with your toddler but they walk away and seem disengaged? They are not ready to problem solve at this point, so they still need some time and space to feel their emotions. Later when the time is right, you can drop down to their level, make sure you tell them they’re not in trouble and you’re not mad at them, and just say you’d like to talk about the behavior from earlier. If they seem to withdraw, tell them you know this is uncomfortable (they are probably embarrassed if they did something like hit someone or called someone stupid), but that you just want to help them make a better choice next time.

If you ultimately resort to spanking when that was never in your plan or what you desired to do, you can save face with your kiddo. Later on, when you’re calm, you can say something like, “I shouldn’t have hit you. I was really scared that you were going to run into the street so I spanked you, and I’m really sorry. I shouldn’t have hit you, and next time, instead of hitting you, I’m going to scoop you up into my arms to keep you safe. It’s never okay for someone to hit you when they're mad.” In order to work on preventing this from happening again, you’ve got to start implementing some self-care that keeps you running at a calmer level overall. Take little breaks throughout the day to reset yourself.

Recent studies have shown that corporal punishment (spanking) is associated with increased aggression and makes it more likely that children will be more defiant in the future.

Spanking alone is associated with outcomes similar to those of children who experience physical abuse. We don’t want to teach kiddos that physical reactions are okay. We don’t want them to grow up thinking they can hit their partner or allow themselves to be abused.  The data shows that spanking doesn’t teach kids right from wrong, and they do, however, learn that aggression and physical means are acceptable ways to resolve conflict.

Keep in mind, people who are spanking to respond to a behavior or an emotion are doing so because they don’t know what else to do. Let’s build those toolboxes. Thank you for your vulnerability and for being so invested in raising emotionally intelligent humans.