Why Kids Lie and How to Respond 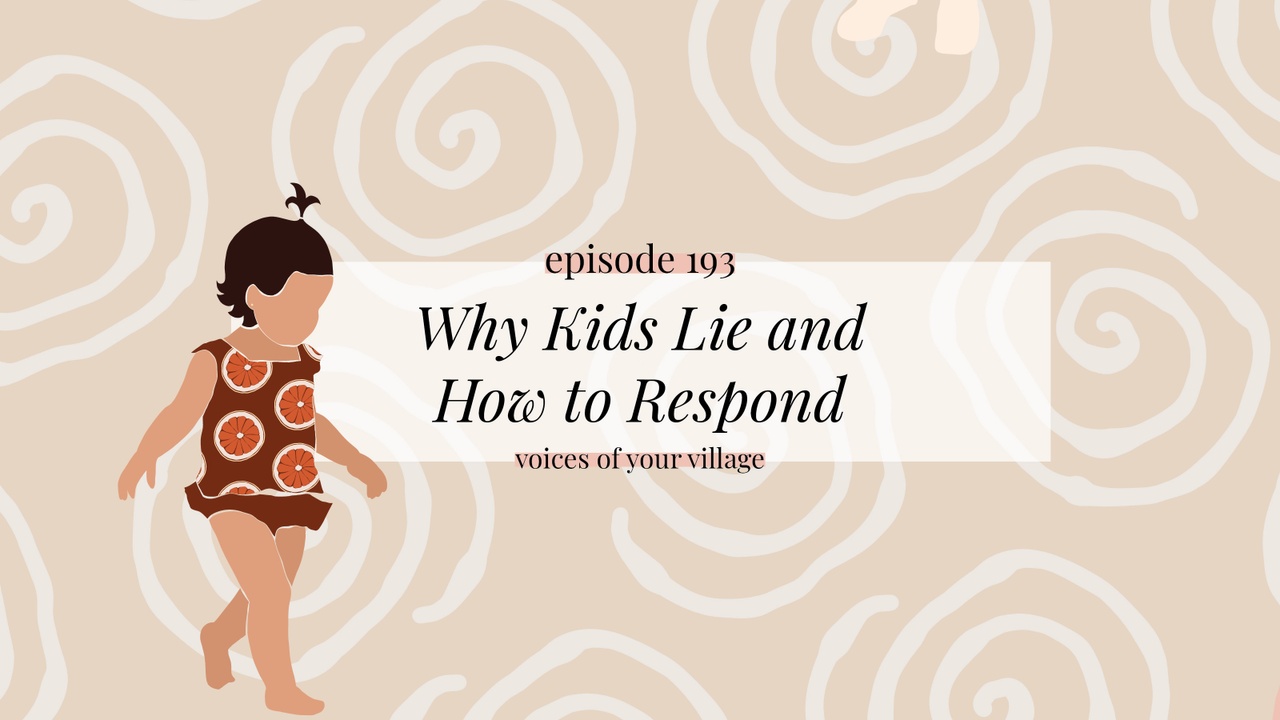 You're listening to Voice of Your Village, this is episode 193. In this episode we're chatting about why kids lie, what's the driver behind it, and how do we respond in a way that's emotionally supportive and truly gets at the root of it. For many of us lying can bring up triggers from our own childhood, social programing, and maybe what we learned about lying or experiences we had around lying. We'll chat about how this might come up and what to do about those parts, and how to tend to those parts of yourself so that you can show up for the tiny human in front of you. Alright folks, let's dive in.

And when we're looking at Child Development, I'm always looking at What are we doing for the future, not just now. But how do my reactions or responses to kids impact what this will look like for the future for them, What toolbox they'll have. And so when I focused instead on, can you tell me what was happening So that I can help you? He knows he's not in trouble now and then he told me the scenario and what was happening. And I was like, oh, you still wanted to have a turn with that. And she took your shovel. He was building something really cool in the sand. And she said, like, the timer went off, It's my turn, and she grabbed the shovel. And he reacted by saying that she was stupid. And I was like, man, you were still building something, and she took the shovel. And he was like, yeah. And I wasn't even done. And the timer went off, but it wasn't even fair. And, you know, he's really just saying, all of all of the words that came after this was, I feel disappointed because my turn with the shovel was over, and I wasn't done with what I was building. And so my job here is to focus on that feeling of disappointment so that he can learn what to do with it instead. So I told him I was like, oh, man, you know, validated all that you really wanted to keep playing with the shovel and building. And the timer went off. And it sounds like it was really abrupt, and happened really fast, where she took the shovel from your hands. And it sounds like maybe you were trying to figure out what to do so that you could have more time with the shovel. I was like, hmm, I'm wondering if, when she took the shovel from your hands, you called her stupid because you were feeling disappointed or frustrated. And so your body reacted really fast. And he was like, well hurts my feelings when she takes the shovel, And I was like, oh yeah, it hurts your feelings when she takes the shovel from you, and you're still using it, And you said something that would hurt her feelings. And I know that you're a really kind kiddo, and hurting somebody's feelings doesn't feel good in your heart. I know that, I've done things before that hurt other people's feelings, and I know how it feels in my heart, And just like paused there and let that sit. And he was like, well I want another turn with the shovel. He's like, well, come on, lady, Let's get back to solving this problem. And I was like, alright, let's figure out what we can do, or what might work to happen next. And I was like, okay, we talked about what scenario had already been set up, and they had set this timer. They'd agreed on that for her to have a turn with the big shovel. And so the next step was allowing him to feel disappointed about not getting the big shovel. And I let him know if you need help when you're feeling disappointed, I can help you. And then when you're ready, we can figure out what you can do next. Since you can't play with the big shovel, We can figure out together what you can do, but it's really hard to figure that out when you're feeling really disappointed in your body isn't ready to figure that out yet so let me know if you want a hug or you want to take a break and play in the waves And then come back and solve this problem. And he was like, we can play just us? And I was like, yeah, buddy, we can play just us. And so we went and we played in the waves for a little bit. And then after playing, he was like, I know maybe I can use the bucket and the small shovel. And together I can scoop stuff from the small shovel to the bucket. And then I can use it kind of like a big shovel. But he needed time and space to figure that out. And really what I, my goal for him here, is to learn that when he's feeling disappointed, he can calm his body before we move on to how to problem solve, or what happens next. And it won't happen immediately. He'll probably say stupid again and again, until we continue with this pattern and teaching him what he can do in those moments instead. But if I would have punished him for calling her stupid, Then he would have every reason to continue to lie to me going forward about whether or not he calls her stupid, because if he lies and I don't find out and he gets away with it, Then he's not in trouble. But if he tells me the truth and he's in trouble Anyway, it's not worth it to tell the truth. When we were playing in the waves and kind of calming down and what not. And then he solved the problem afterwards.

And we were walking back to get the small shovel in the bucket. I said to him, I was like, buddy, I wonder how her heart is feeling after you called her stupid. And I'm just wondering how that might feel for her. And he I didn't have to tell him what to do in any capacity. He went up to her when they if they were like playing near each other then with the shovels in the bucket. And he said, I'm sorry I said, stupid, I was really disappointed. I was like, Yep. This is exactly like this is awesome. And she was like, it's okay. And just went on like shoveling and playing, I think so often, We really want to make sure that we're raising these kind, respectful humans, and were afraid that if they're lying, or they're doing something like saying you're stupid and then lying about it, that we're failing in raising kind, respectful humans. And in actuality, if we continue to punish them, they won't build this toolbox. But if we can connect with them, we can support them in building a different tool box. Some of my favorite phrases around lying are I'm not mad at you. I'm asking what happened? Because I want to help you, Or I feel upset about what happened because I want to keep you safe. Like if a kid lies about a safety thing, and then you're visibly upset, I want to let them know I feel upset about what happened because I want to keep you safe. When you are honest with me, It tells me that you trust me, and I'm so grateful for your trust and honesty. I want you to feel safe, telling me the truth. I will work to stay calm so that I can support you. I will love you even when you make mistakes. It's more important to me that I know so that we can figure out what to do differently next time. And lastly, sometimes I will feel disappointed or scared, sad or angry. It's okay for me to feel those things. I can calm my body down and feel proud and excited and calm and happy again. You don't have to keep me from feeling the hard stuff. Sometimes kids lie to protect us, because they're afraid of our reactions and how we might feel. And I want to let them know I have the tool box to regulate myself. So you aren't in charge of protecting me. I was chatting about this within our village. And I got a few of these comments that I loved. Someone said, my nine-year-old has voiced on several occasions that she likes talking to me over other adults, because even when she's scared, embarrassed or worried, she knows she can trust that I won't punish or have a retribution seeking response. This strategy really works. Someone else said, I've been trying to instill this in my kids, since they were little that there's nothing that you can tell me that will make me mad If you tell me the truth, but I cannot help you If you don't tell me the truth. Come on over to Instagram it's @Seed.and.Sew it's a free group for us to connect where we can continue this conversation. You can provide some follow-up questions. And let me know what else comes up for you with lying. What comes up from your childhood? What are you carrying narrative wise around this? And how does it inform how you react in the moment, or your desire to punish or control a situation in hopes of curbing lying? The thing that we know from the research is that when kids are punished for having lied, or when we're turning to punishments, kids are more likely to lie in the future. And it does not build a toolbox for what else to do next time. All right, folks, come on over to Instagram to continue this conversation. I love diving into these topics with you.