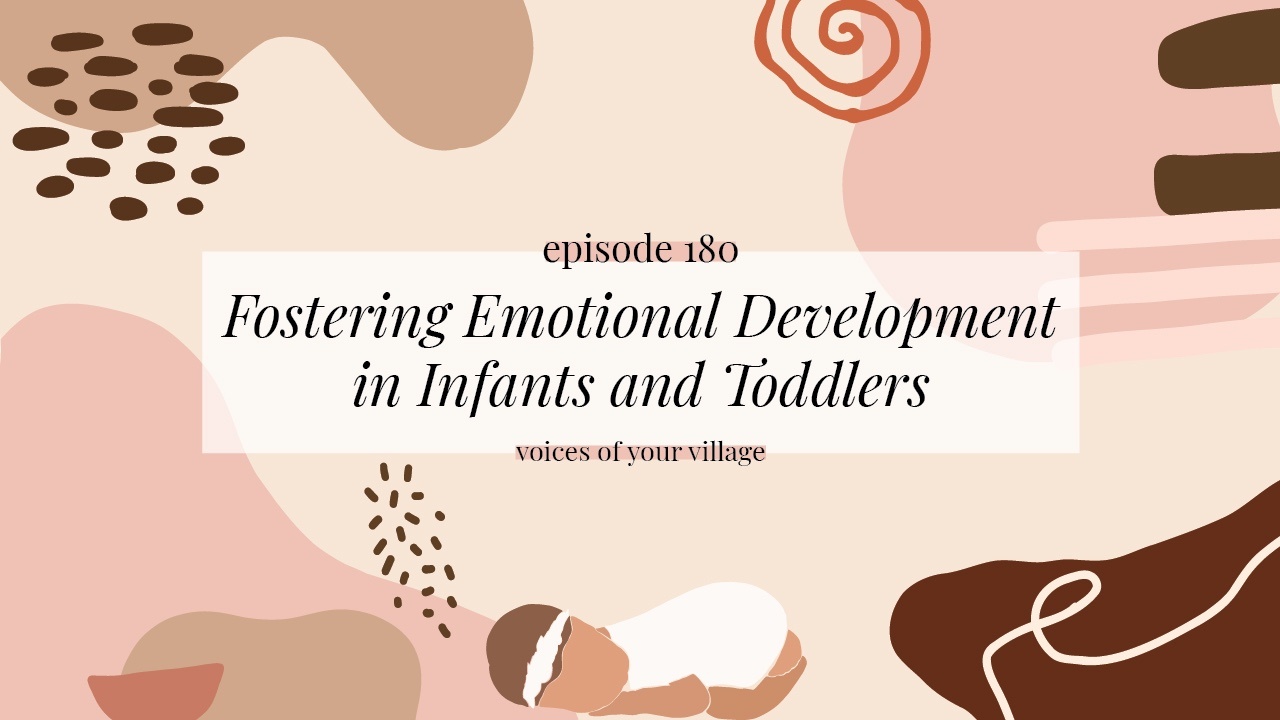 You're listening to Voices of Your Village. This is episode 180. In this episode, I'm diving into how to build emotional intelligence in infants and toddlers. So often we get questions about what if they're not verbal yet or they can't tell me how they're feeling it. How does this look to start with our younger kiddos? This episode is for you, if those are questions that you have, when we researched the CEP method, we researched it with kiddos birth to five and I was teaching infant toddler at the time, my kiddos were primarily toddlers, 1 to 2, and I have been doing this work with kiddos from the get-go from birth, through toddlerhood into preschool years for a long time. It's absolutely something we can do with our younger kiddos and these foundations. When we lay them earlier are game changers for down the road, for our preschoolers for kiddos when they have words to be able to utilize language around how they're feeling and build their feelings vocabulary, I'm so excited for you to build these foundations with the infants and toddlers. So let's dive in.

Alright guys, so often when we're talking about emotion coaching and how to build emotional intelligence in our kiddos, we're talking about kiddos who have verbal language, who are far enough along in their development, that their receptive language is pretty advanced and that, they're at a place where they can understand everything that we're saying to them, or at least most of it. And perhaps be able to express their needs or their feelings, or their desires and communicate with us with verbal language. However, we've been getting a whole bunch of questions about what this looks like for infants and young toddlers. Can we even do this work? Does it not start until later? All that jazz. So this episode we're going to dive in, we're going to dive into how to do this work with kiddos fresh out the womb, my research of the CEP method, the collaborative, emotion processing method, which if you're new here, I co-created the CEP method and we researched it across the US and just wrote a book on it that we're shopping to publishers now. But when we researched it, we researched it with kids, as young as four months, and my hub, for this, work is in infant toddler. You may have heard me say it, but 12 to 24 months is, I think the hardest age and also my favorite age. It's my favorite age to do this work, you can see so much growth and development and it can make such a difference in who the child is as a 2 3 4, 5 year old and beyond. When we lay this foundation for them birth to two. So let's dive into what this looks like. First of all, the biggest component here is us, the most important thing you can work on an infant toddler is pausing and breathing. So that you can respond with intention rather than reacting. This is so hard and infant toddler. Because often, they're crying, they're crying because they don't have the words to communicate otherwise, they're crying because they are trying to learn how to walk, and they fell down, they're crying because they're hungry, they're crying, because they're tired. They're crying because they want to get up, there crying because you walked away. They're crying and so often it's hard for us to regulate our cortisol response because your body is designed to mirror that emotion, they spike cortisol, right? They have cortisol running through their body when they're having a hard feeling and so you automatically your body spikes the cortisol, we're designed to mirror it, it's called mirror neurons. The key here is that it's not their job to calm down so that you can calm down. It's your job to regulate your emotional response so that you can show up and respond with intention. So that when they fall down as they're trying to stand up or take those first steps that you can respond and be like. Oh that's so frustrating. You're working so hard to walk and you fell down again man, that's hard. And then if they need a snuggle you can offer it. Would you like a snuggle before you try again?

You can also check out episode 10 with a speech language pathologist, Sarah Friel, also she has a British accent so it's like a lovely episode to listen to but she gives lots of tips and tricks to help support language development. And how to communicate with kiddos starting in infancy. But also through early, toddlerhood and beyond that can help them build their communication patterns, I would absolutely if you are in that infant toddler world, like, please go listen to that episode next, episode 10. There's also on the blog post for that episode. So if you go to our website and you even just search like Sarah Friel or language development, whatever it'll pull up a the blog post for episode 10 and she created a language development, freebie guide for you guys. That's there too. So you can snag that bad boy. But as you're working on language development here, give them credit these tiny humans understand so much more than we give them credit for. I want to be talking to them all the time, not to the point of overloading them, but I'm going to narrate my day. I'm going to let them know what's coming next, I'm going to when they start crying and throwing their milk cup. I'm going to say uh, it looks like your milk is all gone. Oh man, instead of throwing your milk or instead of throwing your cup, you can say more milk and I will use sign language or gestures for more milk. Letting them know what they can say instead. So here, I'm continuing to build their awareness of your frustrated, that's why you're doing that, instead of throwing this. Here's what you could do. So sometimes, when we're in this infant toddler stage, what appears as a behavior or emotional expression, Is really this inability to communicate what they want to communicate with verbal language. And so as we support them with that, and man, I would start using sign language quite young like in early infancy to start to build, they will develop their fine motor skills, their ability to sign or use gestures before their verbal language. So using that consistently can be huge. I have had kiddos signing back to me at nine months old because we've consistently used signs. It can happen quite young, when they are having those like huge tantrums because they're not going to get what they want. Also, welcome to the rest of life. In these instances, we are going to follow the five phases of emotion processing. Just like we would for older kids except in Phase 2 instead of asking them how they're feeling. We're going to connect and empathize again over what they're feeling. So say, they really wanted to try and scoop something themselves and you did it for them. Oh man, I didn't realize you wanted to do it yourself and I did it for you. So frustrating when you were expecting to do it by yourself and I did it. Just connect with them, let them know you totally get where they're coming from and then here's the kicker guys, this is where your life will be a game changer. So will theirs as a two, three, four year old, five year old and beyond this is the same. Also, if you're just starting this work and you're like okay I'll tune in to see what she says, but your kiddo is older. This answer is the same for older kiddos too while they are whining or crying. It's not a time for talking about the problem. So they come up to you and they're using like a whiny voice. They're not ready to talk about the problem, you can validate still and then man, I cant understand your words with that voice. How can I help you feel calm. So that we can solve this together. Would you like a hug so that we could figure this out together? Would you like to do five big jumps before we figure this out, together? I'm going to give them two options. Would you like a hug? Would you like five big jumps? Would you? If you have the time and space would like to read a book, would you like some space? Would you like to dance? Would you like some squeezes, which might be like some deep tissue, like, muscle work where you're going to like squeeze their legs or their arms or giving them sensory input here. That helps regulate their central nervous system and process that cortisol so that they're ready to problem-solve. if we offer up something like a screen, or a snack when they're not actually hungry, then we're not giving their body the tools that it needs to process that cortisol. Instead we're temporarily numbing it but the cortisol still exists in the unprocessed emotion just lives beneath the surface or ready to explode again.